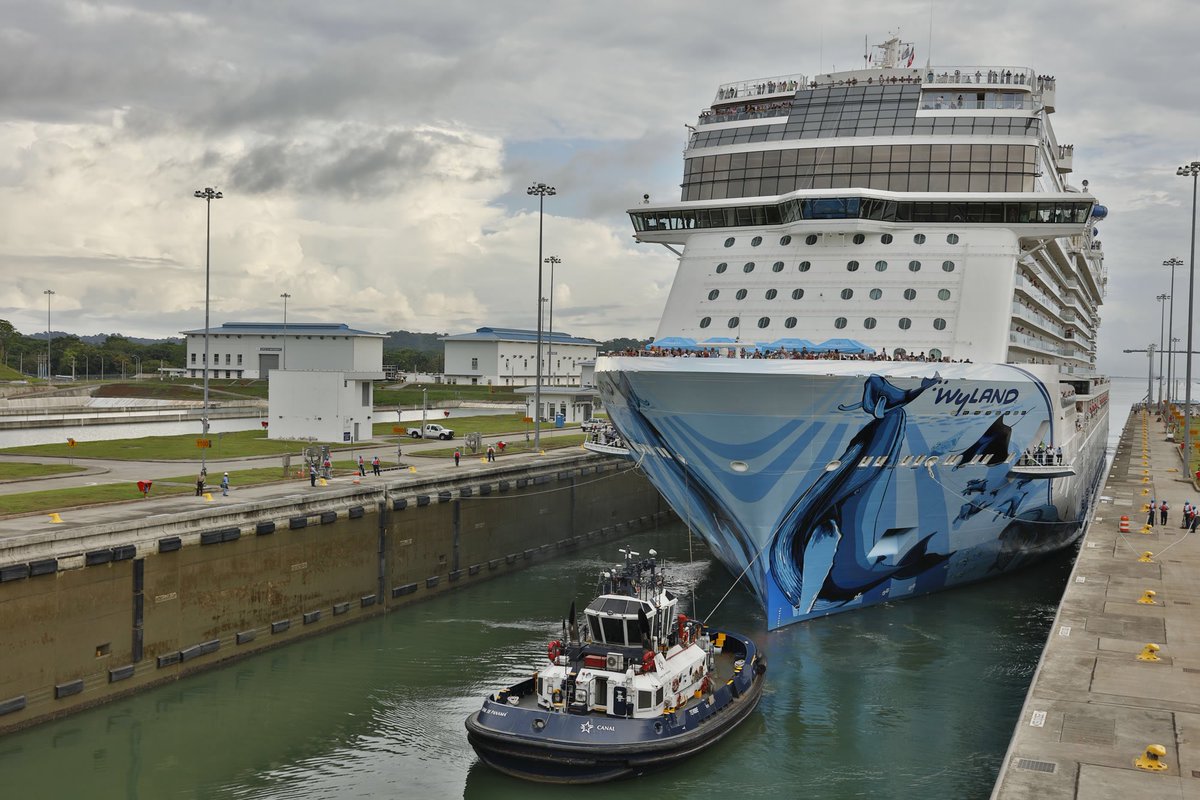 The expanded Canal marked another milestone, this time to get to the cruise ship Norwegian Bliss, the passenger vessel with greater capacity that has gone through the inter-oceanic.

The ship Norwegian Bliss is also the third ship of the class Plus Breakaway of the Norwegian Cruise Line (NCL). The first two are the Escape Norwegian and Norwegian Joy.

Built by Meyer Werft in Germany, ships of the Breakaway Plus class - which the cruise ship Norwegian Bliss is part - have interiors innovative designs, luxury cabins and amenities that exceed the existing fleet of NCL cruises. New vessels are almost 10% larger than those of the Breakaway class and are equipped with cutting-edge technology. Among the attractions of the cruise, a double-decker electric car race track (the largest at sea), a circuit of combat laser to outdoor, large pool area, a solarium, and a water park with two multi-story water slides.

The Norwegian Bliss sailed from the German shipyard Meyer Werft in March to start a route for 15 days this month, sailing from Miami, Florida, through the channel of Panama and along the West coast of North America and Central, to reach its destination in the Puerto of Los Angeles, California. The ship then will serve the Alaska region until the end of the cruise season, after which will reset in the Caribbean. The next day 24 will mark the unofficial closure of the cruise ship 2017-2018 season, with traffic heading north from the Pacific Princess cruise. This boat, operated by Princess Cruises INC., set sail from Los Angeles, California, in a 17-day journey which will include expedited passage through the inter-oceanic. His destination is the port of Fort Lauderdale, United States.

Specialist in international trade of the Canal of Panama Albano Aguilar said that "by the end of the cruise season, the Panama Canal will have traveled a total of 248 passenger ships with a total of 312.304 passengers on board". "This total of transits, 20 correspond to transits for the new locks Neopanamax of ships Caribbean Princess, Carnival Freedom, Carnival Splendor, Norwegian Bliss and Disney Wonder", said Aguilar. With the end of the season, renamed as Princess Cruises, Holland America Line, cruise lines Royal Caribbean Cruises and Norwegian Cruise Line, among others, maintain its proposal to offer itineraries for full transits and partial transits that They include Panama and the inter-oceanic.

On the other hand, smaller as the Voyager Safari and the Wind Star craft, also contributed to segment traffic. These ships, itineraries of eight and 11 days, respective way, anchored in ports located on the West coast of the Central American isthmus. In addition, passing through the Canal passenger vessels which are not anticipated, as Le Boreal and Logos Hope.